26 miles from Port Sudan, 12 miles from the lighthouse of Sanganeb, we find Sha’ab Rumi, one of the most extraordinary and famous coral barriers of the world.
A beautiful lagoon offers a safe berth to boats and a shelter from all winds, whereas in order to reach the diving spots you can use a dinghy.
The most famous dive by far is at the South plateau, it follows the dive at the North West, then the wall on the North East side and lastly the well-known dive Precontinente II, by Cousteau, near the entry of the lagoon on the external side.

Diving in the South plateau is always extraordinary: chances to have encounters are many, various and sometimes unexpected, we are used to describe it as “the world in one dive”.
You can meet hammerheads sharks, whirls of barracuda, pelagic fish. It’s possible to meet bottlenose dolphins or spinner dolphins during decompression.
For many years the guides of some boats have had the habit to do shark feeding, not in a dangerous way and, without any doubt, sorting out a strong effect.
Pieces of fish, heads, fishtails and fishbone were positioned under a rock or inside a basin. Scuba divers used to form a semicircle, reasonably distant and, as in a natural amphitheatre, they used to enjoy the show, catching unforgettable pictures.
Grey sharks were getting close attracted by the smell, swimming mindless of the “guests”, in the middle of red snappers, groupers and trigger-fish attracted into the amusement ride as well.
It wasn’t too hard to take a beautiful close-up, up to details, macros of an eye or the toothed mouth.
Over the years the guides have changed and the schools of thought are now different. Our stance on nature is different in terms of respect, as we would like to have it uncontaminated, with no unnatural intrusion by men, and we believe that a special photo shot could never be worth provoking the franticness of the sharks.
No shark feeding and soon after this type of snapshots become a little more demanding and trusted to luck, depending on the guides’ skills and above all the behaviour you have during these meetings. In fact, it is advisable not to “chase after” the fish or sharks.
It is much more appropriate to exert the tactic of “the waiting”: to stay still and wait for the curious fish or sharks getting close to you.
It seems quite logical that a human chase can’t lead to success: speed, tidal current, loss of the prearranged itinerary can be even dangerous
It happens that grey sharks of Sha’ab Rumi liven up for the familiar noise of the dinghies engine approaching or while waiting for the offered lunch, getting close curious and full of expectations… then going around half disappointed, depending on the school of thought… or the choice of the diving typ.

Two opposite approaches are leading even the introduction to the visit of Conshelf Two (Precontinente II): somebody gets close to it thinking that Cousteau has left, once finished his experiment, cast iron, remains, rubbish polluting the beauty of the barrier, somebody else instead goes there, in amazement, astonishment and respect, to complete a piece of undersea history, interesting and unique, written during pioneer years, with the fantasy during diving and then with the documentaries offered onboard the boats: when Cousteau has built his “village” in 1963: a marine station where some men had lived for 4 weeks.
Sha’ab Rumi is one of the wonders of the marine world, it has always captured and surprised, it’s always been impressed in the memory of who has visited Sudan, as a legendary dive.

Sha’ab Rumi’s Dolphins.Who was in Egypt, especially on a cruise departing from Marsa Alam, will have heard of dolphins Sha’ab Samadai and Delphin reef, will swam together, and will surely have enjoyed unforgettable moments.Swim with dolphins makes everyone happy, puts in a good mood.
Meet them or hear their calls during a dive is always a thrill unparalleled.
Even Sha’ab Rumi, a beautiful and protected lagoon, has its school of dolphins.
We’re talking about Stenella longirostris, particularly famous for his stunts and his agility, for dips and jumps, for what is called “bowriding” that is ride the waves produced by the prows of boats and ships.
The desire to play a little with the guests varies a bit depending on the time, is less when there are puppies and the group becomes alert and protective, but the chance to swim or dive with them when back from the dive or in the break between a dive and the other, has become almost a habit to scuba divers. The water of the lagoon is not always clear, but the fun, to get close to them is priceless and just below the surface the shots are a great souvenir.
Fortunately today, there is no need for special permits or taxes to spend time swimming and shooting, the survival of the encounters and its repetition is ensured by the limited number of boats and guests in Sudan and by the non-invasive respect dictated by the common sense. 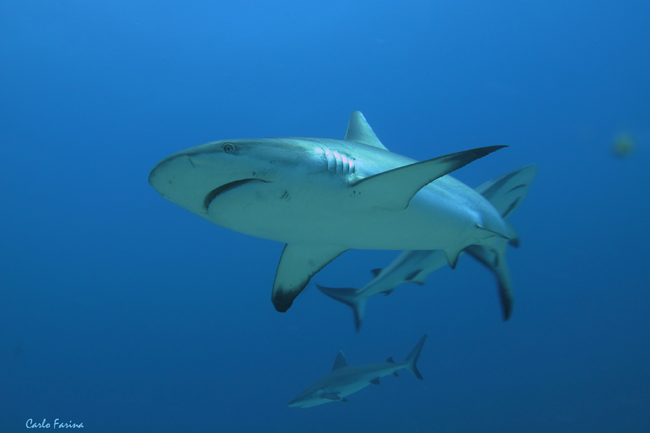