Fourteen miles from the port of Port Sudan, sailing towards NE, you meet the coral barrier of Sanganeb. On the extreme South end of the reef, the famous lighthouse rises up.
It was built in 1906 by the English, when Sudan was protectorate of the British Empire. The first lighthouse used to be a cone shaped construction, as you can see on the postcard of Klaus Huelse, metallic, about 55 meters high, its white and blinking light ranged over 18 miles.

The current structure is made of concrete blocks instead, on top there is a metallic beacon lodging the optical system and it’s surrounded by a circular switchove.
At the base of the lighthouse, on two levels, there are several rooms such as an ex library . Then a few rooms, bathrooms and kitchens, partly occupied by the staff: a caretaker, the electrician, the cook, a security representative.
There are some low one-floor buildings and partly abandoned, detached from the main construction around the little square at the base of the lighthouse and 2 long piers, one northward and the other one southbound. The one facing South has rails and a trailer truck for materials to be taken from the lighthouse to the extreme point of the barrier on the sea. The optical signal is made up of a white flash every 5 seconds.
Among the dives at the south west plateu, at south east wall and at the extreme North point, you always find the time to go up to the top of the lighthouse. T
he blue 360 degrees horizon, the infinite space, the solitude of just the sea fulfil the fascination of Sanganeb. It’s not hard to be ravished. Sanganeb is a Marine Park since 1990. The barrier is about 3 miles long and 1 mile large. There are lots of suggestive stories about the Red Sea pioneers, the brave and adventurous who first went there and started diving with no comfort compared to what we are used to today with the M/Y operating from Port Sudan. Hans Hass, when he arrived in 2007, told us that then he had the chance to meet a white shark in the South, near the pier… 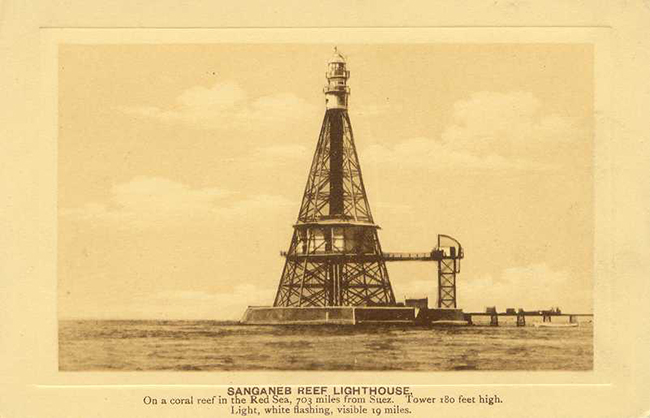